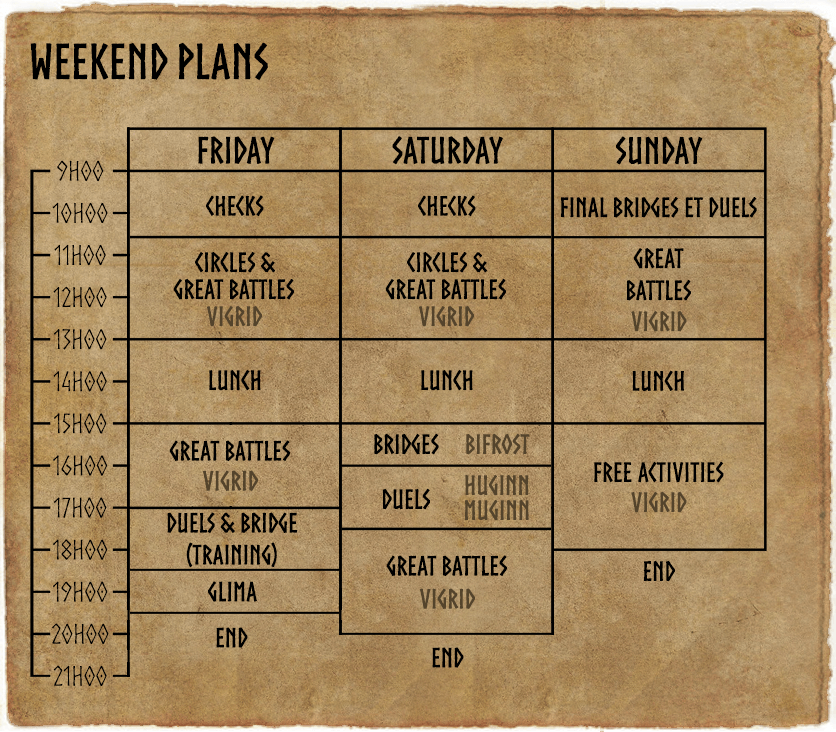 To warm up and meeting each others we propose to you two games we especially appreciate.
Shooting weapon prohibited!

Honorful circles: Nothing more simple. You pick an opponent, you fight, you greet yourselves as respectful persons, and the loser leaves the battlefield. The other participants will do the same simultinaly. If you win, you can pick another fighter still alive. The game ends with the last duel.

Honorless circle: Viking battle royal. No greetings, no civility, no honor. Only one objective : be the last one standing in this battle where everyone fights for its own life.

Face each others in teams of 5 in a restricted space where a shield is laying on the ground in each team starting area. Two possible way to win:
- kill every other opponent
- touch the opponent shield without dying

The combat area being a representation of a bridge which both teams want to take control, if you put a step outside the bridge we throw you overboard, you will be eliminated.

Shooting weapon prohibited! Weapons restrictions (sword/langseax and danaxe) are not valid for the bridge!

Under a tournament, come test you ability in single combat, all weapon included.

The main activity of these special edition ! Two fierce armies, a battlefield straight out of History, a rage to vanquish on both sides but only one bridge… What’s better for epic fights !

See all the rules of this game on this page

How to win:
To win you must succeed in taking the opposing banner and bringing it back to your own Banner Zone.